Adi fighting for the US market...

Adi returned from America on Wednesday, but here is a very nice article by American wine writer James Molesworth on Wine Spectator


I have decided to post the whole article here, since you need to be a subscriber to the site to read it all, and it is a nice insight into South African wines making name and getting a foot in the door of the US market. (And because he says some lovely things about Adi - and no, I am not refering to the wooly bear comment...)

There are plenty of rock-star winemakers—cool guys and girls with cultivated hipster images making cool wines. And then there’s Adi Badenhorst, of South Africa's A.A. Badenhorst family, who sat down with me here in my office today.
There’s nothing cultivated about his image: He’s a wooly bear, with a pony tail that looks like it’s been wrestled into submission, pork-chop sideburns and a former rugby player’s body. Talkative, loud, engaging and fully immersed in making wine, Badenhorst is currently carving out his own little corner of the Swartland in South Africa, working on the northern side of the Voor-Paardeberg ward, neighboring his good friend and fellow winemaker, Eben Sadie.
I first met Badenhorst, now 37, when he was working at the prominent Rustenberg winery, though he eventually left that cushy gig to start his own project, buying a 60-hectare, run down farm that caught his eye for its old bush vines, a motley collection of everything from Grenache, Syrah and Cinsault to Colombard, Fernão Pires, Verdelho, Palomino and Muscat.
“The place was pretty beaten up when we bought it in 2007,” said Badenhorst. “So it will take a while to get it back into shape. Stuff like Palomino and Muscat are there from when the older workers would graft vines here and there—good eating grapes for when they were out in the vineyards.”
“But the Grenache is the oldest planted in the Swartland, from 1951, and I’m buying in a little Chenin Blanc from 30- to 45-year-old vines too. There’s some great stuff here. We’re keeping everything but the Cabernet. We’ll add more Chenin, as well as Grenache Gris, Roussanne and Carignane,” he said.
After starting his own label, it took a while for Badenhorst to get his wines into the marketplace (I reviewed the debut releases, which didn’t make it here). It’s a part of the business side of things that Badenhorst expected, though still overwhelms him a bit.
“You can’t get out and do anything else,” said the fishing fan, half-exasperated, of the demands of running a small family estate (he runs it along with his wife, Cornelia). “You can’t get away. It’s not just making wines. There’s all the admin stuff, and paperwork and shipping and this and that. You have to do it to understand how much there is of it. Thank god Cornelia is there to yell at me once a day and get me going,” he added in his usual self-deprecating style.
As consuming as it might be, he’s hardly worn down by it. With a suntanned face, Badenhorst veers from wine to soccer back to wine to politics to rugby and back to wine again in his totally uninhibited, freewheeling style. His wines are an extension of himself in every way—the top red a blend of Shiraz, Mourvèdre, Cinsault and Grenache (the ’07 vintage will be available in the U.S. market, slated for a September release), the ’08 white an even more eclectic mix of Chenin Blanc, Roussanne, Grenache Blanc, Viognier, Verdelho and Chardonnay. Both are set to retail in the $35 to $40 range, a daunting task to Badenhorst, who admittedly doesn’t carry a lot of name recognition here, despite his popular status back home.
“Man, how are you going to get someone to pay $40 for a South African white that’s a blend of all that?” he asked incredulously. “Your three-tier system really gets in the way. I’m going to really need a guy in the shop who’s switched on to South Africa, and is passionate about the stuff to really push it for me.”
Badenhorst also has a second label, Secateurs, which will retail for $15. The red is a blend of Shiraz, Cabernet Sauvignon, Cinsault, Mourvèdre, Grenache and Carignane, the white made from only Chenin Blanc. The wines are traditionally made: Reds are not destemmed (the red varieties for the Secateurs are even cofermented) and fermented in either old oak casks or cement vats. Badenhorst aims for lower alcohols as well, rather than a fuller-blown profile. (As usual, formal reviews of the newest releases, based on official, blind tastings, will appear in the near future.)
“You give up a little bit of that sweet fruit profile, which I do like in some wines,” said Badenhorst. “But I prefer a little rough edge around my wines. I’ll never be accused of making the most perfect wines,” he said with a laugh.
The Swartland has become South Africa’s wine frontier, drawing a small, but growing cadre of young winemakers looking to make wine outside of the standard Cabernet Sauvignon or straight Syrah bottlings from the more prominent and established Stellenbosch and Paarl regions. Along with Sadie, Chris and Andrea Mullineux are also forging a path there, with their Mullineux label. Badenhorst, who spent time abroad at St.-Emilion’s Château Angélus, the Rhône’s Alain Graillot and elsewhere, fits right in with the rogue mix of personalities in the area.
Here’s hoping that 1,000-watt personality helps open doors for him here, because the wines are worth it. 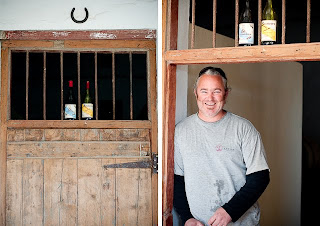 A.A. Badenhorst Family Wines
Malmesbury, Swartland, Western Cape, South Africa
AA Badenhorst Family Wines are made on Kalmoesfontein farm in the Paardeberg area, it falls in the Swartland appellation, between Malmesbury and Wellington. The property is owned by the dynamic and good looking cousins Hein and Adi Badenhorst. The two of them have restored a neglected cellar on the farm that was last used in the 1930's, to make natural wines in the traditional manner.