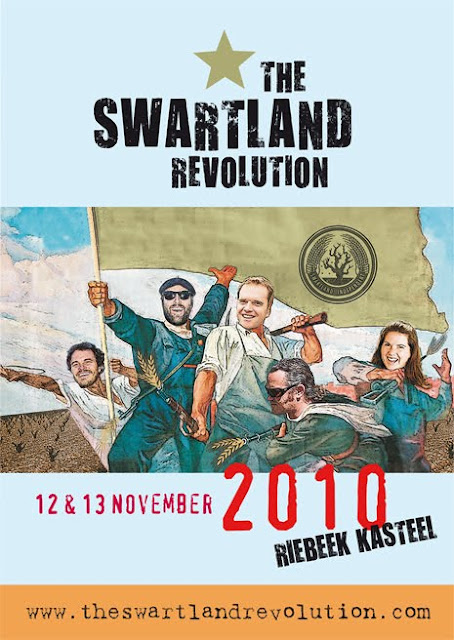 The cat it out of the bag, the red wine is spilled on the white table cloth, the revolution has started...
A Badenhorst Family Wines, Mullineux Family Wines, Porcelain Mountain Wines, Sequillo Cellars and The Sadie Family Wines
brings you the first annual Swartland Revolution Weekend.
When: 12 – 13 November 2010
Where: Riebeek Kasteel
Over the past 15 years the Swartland region has grown in stature and complexity and today there are enough contrasting wines to showcase this diversity over a weekend.
The aim of the revolutionary weekend is to raise general awareness of the area, and although there might be stylistic and philosophical differences in the wines to be showcased, they all share a common sense of place – as with all great wine regions of the world.
For the first forum we have invited Stefan Ogier from Domaine Michel & Stéphane Ogier from Ampuis, France. He is a world-renowned producer of fine Rhône wine.
There will also be tastings conducted by some of the local producers in formal and informal formats as well as great meals prepared by Reuben(of Reuben’s Restaurant fame) and local culinary hero Mynhardt Joubert of Bar Bar Black Sheep.
For more details including a teaser programme and booking informationvisit our website.
www.theswartlandrevolution.com
The Swartland is producing some of South Africa’s most exciting wines, with its old bush vines expressing a lot of intensity of fruit. Winemakers such as Eben Sadie and Adi Badenhorst have made their names in this incredible region with unique terroir and wine making styles. – Under the influence, June 2010
So, tired of fashonista cuvees, head out to Malmesbury to embrace the zeitgeist of zef wine – Neil Pendock, May 2010
There is unqualified respect for the area’s terroir and the wines it produces. In its favour are ancient soils, old bush vines and interesting grapes – from Chenin Blanc, red and white Grenache to Clairette Blanche and Shiraz. - WOSA

A.A. Badenhorst Family Wines
Malmesbury, Swartland, Western Cape, South Africa
AA Badenhorst Family Wines are made on Kalmoesfontein farm in the Paardeberg area, it falls in the Swartland appellation, between Malmesbury and Wellington. The property is owned by the dynamic and good looking cousins Hein and Adi Badenhorst. The two of them have restored a neglected cellar on the farm that was last used in the 1930's, to make natural wines in the traditional manner.